The Consumer Financial Protection Bureau has wrapped up a series of enforcement actions regarding deceptive mortgage advertisements sent to military personnel and veterans, bringing in $4.4 million in penalties.

All the cases involved companies that used direct mail to market their products. The investigation was started by the CFPB after the Department of Veterans Affairs expressed concern over potentially unlawful advertising.

In the ninth and final case, Low VA Rates agreed to a $1.8 million fine, by far the largest financial penalty imposed against the lenders involved. Low VA Rates, along with the eight other companies accused, settled without admitting or denying any of the findings of fact or conclusions of law, according to the respective consent orders. 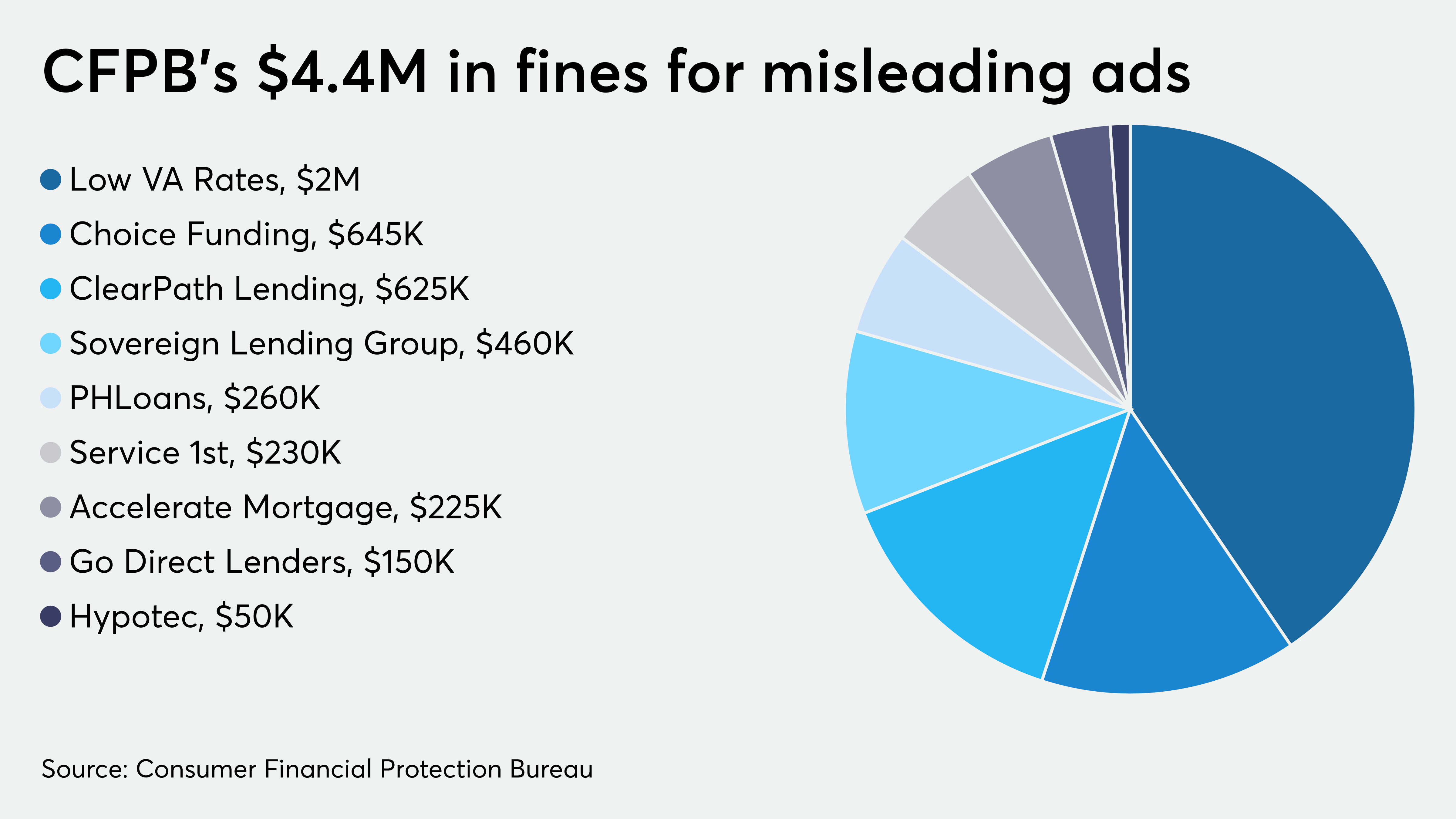 Low VA Rates was accused by the CFPB of violations of the Truth in Lending Act, as well as the Consumer Financial Protection Act’s prohibition against deceptive acts and practices, and the Mortgage Acts and Practices – Advertising Rule.

The CFPB accused Low VA Rates of misrepresenting the annual percentage rate on advertised mortgages and for advertising credit terms that the Utah-based company was not actually offering to customers, among other issues.

Some of the accusations made against Low VA Rates involved marketing materials for cash-out refinancings. In the past, Ginnie Mae, which guarantees mortgage-backed securities containing VA loans, has expressed concern over high prepayment speeds and cash-out refis of recently originated mortgages.

According to the consent agreement, “numerous Low VA Rates mortgage advertisements advertised ‘cash out’ credit terms that Low VA Rates did not actually arrange or offer.” One advertisement, for example, incorrectly claimed that the borrower could “take $20,000 cash-out for only $87.48 per month!”

“In fact, obtaining any cash-out amount against the consumer’s home equity was possible only if the consumer had an existing mortgage and refinanced the entire amount owed on that mortgage as part of a cash-out refinance mortgage, resulting in a total monthly payment larger than $87.48,” the consent agreement said.

Besides the fine, Low VA Rates, as well as the eight other companies, must designate an advertising compliance official who must review its marketing for conformity with the appropriate laws prior to the company using the materials.

The CFPB announced the first two settlements in July, with Sovereign Lending Group for a fine of $460,000 and Prime Choice Funding for $645,000. The third case involved Go Direct Lenders, which settled for a $150,000 fine.

These fines are in-line with some past CFPB penalties for deceptive advertising. Back in April 2015, RMK Financial paid a $250,000 fine for sending out marketing materials with the VA and Federal Housing Administration logos. Earlier that year, Flagship Financial Group agreed to pay $225,000 while American Preferred Lending settled for $85,000.